“Embroidery has rarely been so vivid”

Ariadne, daughter of King Minos of Crete, helped Theseus to slay the Minotaur which half man, half beast was imprisoned in the Labyrinth. She gave Theseus a ball of golden thread to unwind and mark his path into the heart of the Labyrinth and to signify his return.  Theseus killed Ariadne’s monstrous half-brother and followed the thread to emerge victorious from the Labyrinth.

The Golden Dawn party was formed in Greece in 1980. In September its leader Michaloliakos and other members were arrested following the murder of the anti-fascist rapper Pavlos Fyssas. This increasingly militant party built its reputation on the current pressures on the economy and in particular it’s anti-immigration position.

I have brought these two separate stories together through the use of the golden thread, to comment on the current politics of Greece (a place I have my own personal connections to) and the wider ripples of debate on the nature of territory, cultural identity and the defining mythologies that map our beliefs and attitudes. 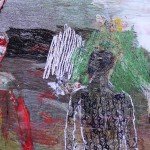 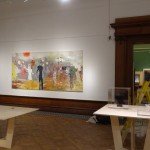 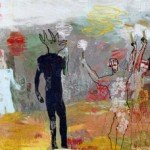 My work often draws on the archetypal story, the myths and the folk tales which resonate in our cultural psyches and which enable us to untangle the invisible truths, the structures of morality and experiences of everyday life. In conflating the personal with the actual and the archetypal, I am making my own meanings  which resolve inner conflicts and external provocations . I make my own worlds with a sequence of real and surreal scenes of borrowed references and imaginary figures.

The works are made in stitch, they are often like tapestries in scale and take months of slow sewing to produce. They use stitch as a gesture, it has been described as painterly and drawn. With its rich surface the stitch allows me to play with texture and light and to make shadows and glistening form. There is a tradition of stitched narrative which goes back to the Bayeaux tapestry. My work is determinedly contemporary in its process and themes, yet I am still within the histories of women who use the medium of textile to thread their lives into the vast fabric of encounters with everyday existence.