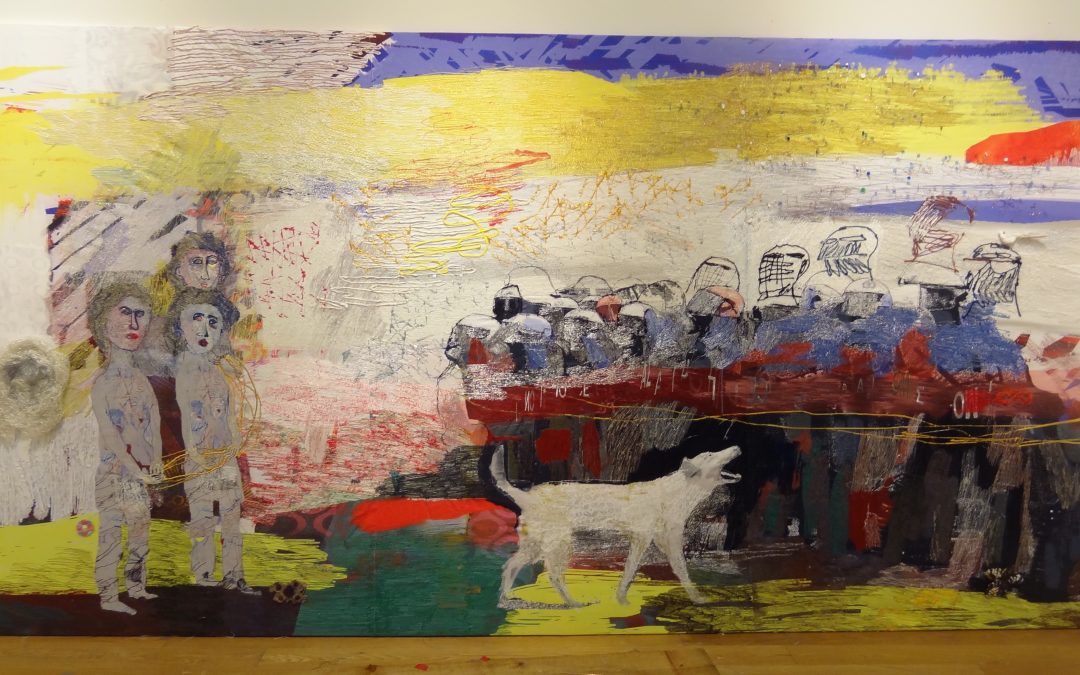 Collect, the Saatchi Gallery with Contemporary Applied Arts Gallery May 2015

‘Here and Now – Stitches in time’ In collaboration with Alice Kettle 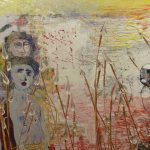 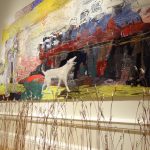 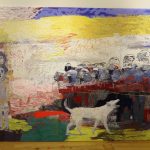 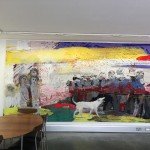 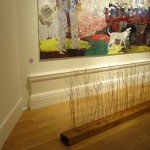 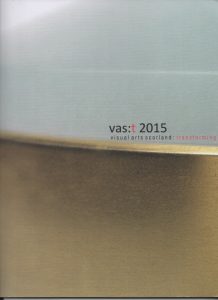 Enchantment is Alice Kettle’s mother tongue. Her monumental thread works belong to a genealogy of stitch that includes the Bayeaux Tapestry and the likes of Anne MacBeth of the Glasgow School of Art, but which also sparks associations with twentieth century artists such as Arthur Boyd. Boyd’s huge tapestries, like Kettle’s, reveal a preoccupation with myth and fantasy, animal and human, spirit and flesh. Like Boyd, Kettle’s works provoke reverie-induced ways of digesting and making sense of history, imagination and narrative.

Unlike Boyd, the interpenetration of Kettle’s creative space by other beings, forms and voices is unashamedly feminine. Time is not ruptured in the worlds she depicts. In expanded time-space things speak – furniture, trees, stones, animals – and poetry and ritual are the ground for such discourse. Kettle’s worlds offer the possibility of transformation followed by a return to the everyday with a renewed sense of wealth and vitality.

Two of Kettle’s large pieces, Pause and ll Pause ll , draw from Nicholas Poussin’s Dance to the Music of Time, and feature four women – Kettle’s mother with her three daughters, and Kettle as mother, with her three daughters – dancing in a ring. Here and in other works, the circle is portal to an altered state in which time becomes cyclical, self-generating, fecund. The depth and richness of the blue palette suggests time out of time. In the cycling of the four women, the dichotomies of life and death, division and unity, loss and possession are blended and dissolved.

The works in this show are not without their darker sides however. The forces that reside in enchanted spaces are non-human, potent and in their otherness, cannot be wholly tamed or controlled. Kettle intimates something of the dark side of enchantment in her description of the home attached to her father’s job as schoolmaster at Winchester College:

I grew up in a huge Elizabethan house, it was deeply dark and cavenously light, with dominating aura and potency of itself. It was a living thing, creaking, watching, filled with scratchings and people I did not understand. There were haunted places you did not go, terrifyingly chilly and brooding. The walls were 6 feet thick with invisible spaces, sounds of those you could not see, smells and potencies. The house was full of boys, it was their boarding school, never safe for us girls, but where we, my sisters and I, as girls must dissolve into the panelled walls that were buzzing and alive, with stories of the past, overheard conversations of the present, to be seen and not heard.

In this world, collaboration with inner dreamscapes contacted through fairytales and stitch in the company of mother and sisters, was both necessary and welcome.

This offsetting of the darker side of enchantment through dialogue and affinity forms the basis in this exhibition for Kettle’s most recent collaboration with Kirsteen Aubrey and Amanda Ravetz, colleagues of Kettle’s at Manchester School of Art. Working fluidly with molten glass Aubrey has created a free blown form that flows and yet evokes stillness. The gently folding rim and aperture creates an interactive experience, enticing the viewer to look into the form and view the film projected within. In her projection, Ravetz has charted the creation and dissolution of string games. String figures, know to many Europeans as ‘Cat’s cradle’ have long interested anthropologists in parts of the world such as Australia and Torres Strait. They constitute a form of drawing, a way of giving form to myth and story. Paradoxically, string and hands and other parts of the body cooperate in pulling the string apart, in order to hold the figure together. Out of what can appear to be a lifeless slump of twine emerge forms that transmute and transform. The space between hands, teeth and fingers, like those of enchantment that preoccupy Kettle, hold our attention due to their ephemerality, their ability to figure things and then as quickly shift shape, de-form.

The Dog Loukanikos and the Cat’s cradle made by Kettle gives symbolic and narrative weight to the co-labouring threesome. On the left are three female protagonists – Kettle, Aubrey and Ravetz. Between their hands is stretched a string figure in yellow twine, the colour of clear mind and clear sightedness. To the right is an army of riot police, bound or perhaps protected by the same yellow string. Between the two groups an aggressively barking dog faces away from the group of three women, and towards the police. Like the dog of Hades, Loukanikos mediates politics and magic, reproduction and territorialisation, dream and disillusionment.

Together these works, through their extended meshing and resonance, feedback and digestion, invite the audience into a space of crafted poetics. While such a space can be one of joy, dreaming and timeless reproduction, there is always another face, where fragmentation threatens and magic dices with power. The space held open invites the audience to enter new stories and narratives, to contemplate the depth of collaboration, and to allow these enchanted spaces to further resonate through time.